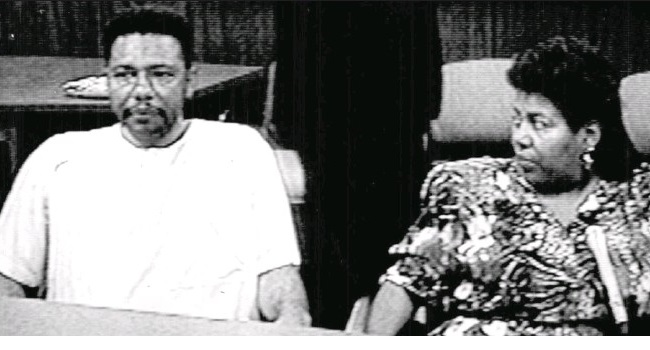 Winndye and her partner, Larry Hoover in court

Winndye Jenkins is well known as the wife of the infamous former leader of the Chicago gang; Gangster Disciples. Winndye was always loyal and supportive of her husband despite all she has been through with and because of him. Winndye has been recognized as a very strong woman whose dedication is unwavering. She has proven this over the years with her consistency in showing her undying love and support for her husband.

Winndye Jenkins was born on the 12th of August 1950. She is 71 years old as of 2021. Jenkins is of African-American descent just like her husband.

. Winndye And Larry Hoover Were Unable To Get Married

During an interview, Jenkins disclosed that despite being with Larry since the late 60s, they weren’t married. Jenkins stated that each time she and Larry planned to get married, it was always foiled. The Penitentiary where Larry was kept always found a reason to prevent the union between the couple.

However, Jenkins has been described as Larry Hoovers ‘Common-law’ wife.

She was accused of helping her husband launder money through her business. Jenkins used to run a concert-promotion business sometime in the mid-60s. This business, authorities claimed was one of the ways her husband used to launder money.

Although Larry was apprehended, his wife Jenkins was not charged with any crime.

. Her Partner Was Arrested And Sentenced To Life Imprisonment

Larry was sentenced to 6 life sentences which translates to 150-283 years imprisonment. The charges leveled against the founder of the Gangster Disciples gang were long and quite disturbing.

These charges ranged from murder to conspiracy, extortion, and engaging in criminal activities. He was arrested in September of 1973 and by November of the same year, he was sentenced.

. How Winndye Jenkins Dealt With Her Partner Being Incarcerated

Jenkins was sentenced a few months into her pregnancy with their son. She was expecting a baby when the court reached its verdict and sentenced Larry. Therefore she was left to go through the struggles of pregnancy and childbirth alone.

Even at this, Jenkins was still determined to keep her family together. She vowed to always take her family to visit Larry at least thrice a year.

However, the prison guards at the United States Penitentiary ADX Florence made her visits really difficult.

Whenever Jenkins visited with her family, they always sort ways to prevent the visits from happening. These means were either by inciting her or accusing her of promoting her husband’s gang activities.

They go as far as revoking their right to visit her husband for a year because of minor errors.

Once, Jenkins was still recovering from thyroid surgery and couldn’t speak up well and the prison guards frustrated her visit.

These and many more incidents made Winndye believe the guards were racist and promised to sue the Penitentiary.

Larry Hoover’s lawyer Justin Moore also cited that the guards infringe on confidentiality between him and his client. Moore said he would join forces with Winndye to sue the Penitentiary.

. Jenkins Has A Child For Larry

Right now, their son is all grown up and has a family of his own but still goes to visit his father with his mum and kids.

Larry Hoover Jr. has two kids, a son named right after his dad, Larry Hoover III, and a daughter.

The Larry Hoover family has grown despite Larry Hoover being in prison for several decades and only seeing his family every now and again.

. Jenkins Has Always Been Loyal To Larry

Jenkins never lets the fact that she and her family have been treated terribly by the prison authorities at the ADX Florence Penitentiary deter her. Jenkins remains loyal to her partner and father of her kid.

Jenkins was constantly fighting for his cause and tried to see him get parole. Although he was denied parole, she still solidly stood by him.

Jenkins told the guards at the correctional facility several times that she would continue to visit her husband until she dies. This promise she has fervently kept to.

Jenkins never missed the opportunity to visit her husband and at the times when her visits were revoked, she suffered heartaches.

As her partner was arrested and sentenced, Jenkins started to work for and with Rite-way Huggins Construction Services, Inc. The construction company was run by Larry Huggins. He was a government contractor and also a fundraiser.

Jenkins worked as a clerk for the construction company. Her son, Larry Hoover Jr. also acquired a property from Larry Huggins.

The relationship between Larry Huggins and the Jenkin-Hoover family put Huggins under police scrutiny. He was questioned about certain incidents and he claimed that he did not know Larry Hoover Snr.

Larry Hoover Snr. also confirmed the statement and emphasized that he had no business with Huggins.